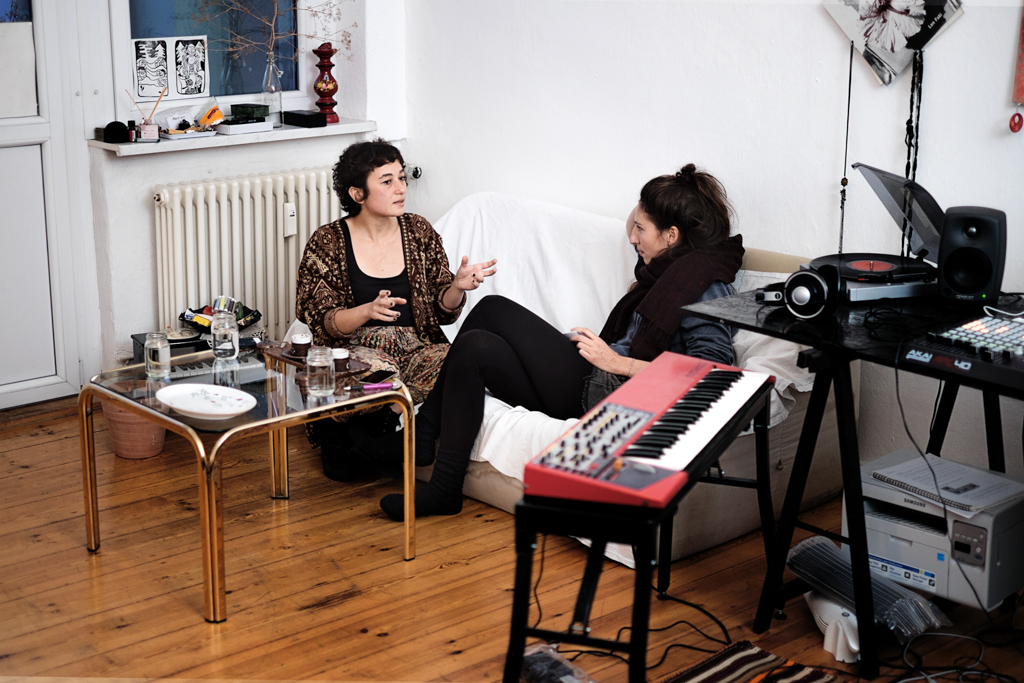 Nene Hatun produces »psychedelic-Anatolian techno-pop«, as she describes it. To do that, she combines Eastern and Western rhythms and sounds with each other. Nene Hatun, whose real first name is Beste, has been living in Berlin for four months and is currently working on a new release with the Berlin record label Beatbude. Today, we were invited over to her place for coffee. Tell us, Beste: How did you find each other, you and music?

A good friend of my grandparents owned a piano. When we would visit them in Izmir as kids, I would touch the keys and play melodies that I had heard somewhere. One time she shouted in her French accent: »Oh, Beste çok yetenekli! (engl. Beste is very talented! – ed.). When I die, she has to get my piano.« On my eleventh birthday, she said to me »Beste, I’m still not dead yet, but you just have to learn how to play the piano. Therefore, I’d like to give it to you now«. From that day on, I didn’t do anything else, I was obsessed. When I was thirteen, I went to the conservatoire and had piano lessons every week. I owe it to that woman more than anyone else that I became a musician. She’s still living and is ninety-five years old now.

Your name »Beste« means »composition« when translated. Your parents didn’t give you that name for no reason, did they?

My parents have absolutely nothing to do with music. But my grandmother’s name was Besti Teyze; she had emigrated from Azerbaijan to Turkey. My parents named me after her. But my stage name is Nene Hatun, which means something like »Grandma-Woman«. I’m Grandma-Woman (laughs).

And how did you end up studying piano in Tel Aviv and Stuttgart?

The pianist Fazil Say travelled through Turkey searching for talented young students. He chose two others and me and took us with him to Ankara. Thanks to his support, I travelled to Tel Aviv, where I studied for a year at the Buchmann-Mehta School of Music. I also had to learn Hebrew, Jewish philosophy and history. But I only wanted to make music, so I applied to the Academy of Music in Stuttgart. There, I studied piano composition. How did your classical piano training influence you?

Studying music influences you your entire life. It was 15 years of hard work, when I look back on it. During my studies, I learned how to play classical composers. Bach, for example, is exactly coded and predetermined. And you play him exactly like that. For me, what comes from your heart, from your spirit and soul, is more important than playing things exactly the way they were written. In Turkey, the medium through which the music arises takes more of a central position than the musician does. Saz, bağlama (long-necked lutes – ed.), and frame drum are important instruments. There are many anonymous songs, which are popular in Turkey and its neighbouring countries. People sing them in Turkish, Armenian, Georgian and Azeri, but no one knows who wrote the song. For me, the contemporary musical geniuses who create songs and deal with waveforms are also important. I barely work with notes anymore.

Could you describe your music in detail?

The basic structure of my music is Western-influenced. The melodies and rhythms, however, come from Turkey and Azerbaijan; I carry them in my heart.

Eastern music is more horizontal, so the tones are able to move more and the rhythms are freer. More happens in a bar. I try to bring the intangible elements together with the logical part of music. In this process of making music, I see myself as a searcher. One song that I especially like is »Asiye and KeşanPeştemalBeat«, in which you yourself also sing.

That’s originally a melody from the Black Sea Region, which my Mom always used to sing. I created the beats for it on my analogue drum synthesizer. The hard sound stands in contrast to the soft voice.

You’ve got a lot of equipment piled up on your desk: a synthesizer, a MIDI keyboard and many other electronic instruments. Do you use all of them to produce sounds?

Yeah, I use my synthesizer when I want to improvise with sounds and effects. I also work with samples. The Turkish Music Conservatoire in Rotterdam made a lot of samples available to me. To experiment with them, I use the MIDI keyboard. Then there’s the Kaoss Pad for crazy effects. But obviously you can make music with far fewer things. No, I always play live. Being a DJ is like the role of a conductor in front of an orchestra. I want to be the person who plays or writes the music, not who conducts it. However, my newest hobby is vinyl records. I’ve been inspired by my flatmates who produce and sample hip hop beats.

I heard you are planning a release with the Berlin record label Beatbude. Are you able to tell us anything about it?

Right, Beatbude is a small label from Neukölln. Right now, we’re working on a 7“-Vinyl with two to three songs, which will contain cosy tracks by me. I’ll be selling the record at my concerts soon.

You’ve been living in Berlin since the summer. How do you like it?

A lot. In Stuttgart, everything was very nice and orderly. In Turkey, nothing is in order and an unbelievable chaos rules in the cities, which is very inspiring. That is sometimes similar in Berlin. A ride on the bus along the Sonnenallee can be a great adventure. When can we see you at your next show?

On January 28th, I’m playing as a guest at a concert by Helmut in the bar Heiners and on January 20th, in the Rummelsburg Bay. On August 15th, I’m at the Kosmonaut in Berlin and definitely somewhere else before that, too. That’ll all be announced on my homepage.

You can find a selection of Nene Hatun’s music here: