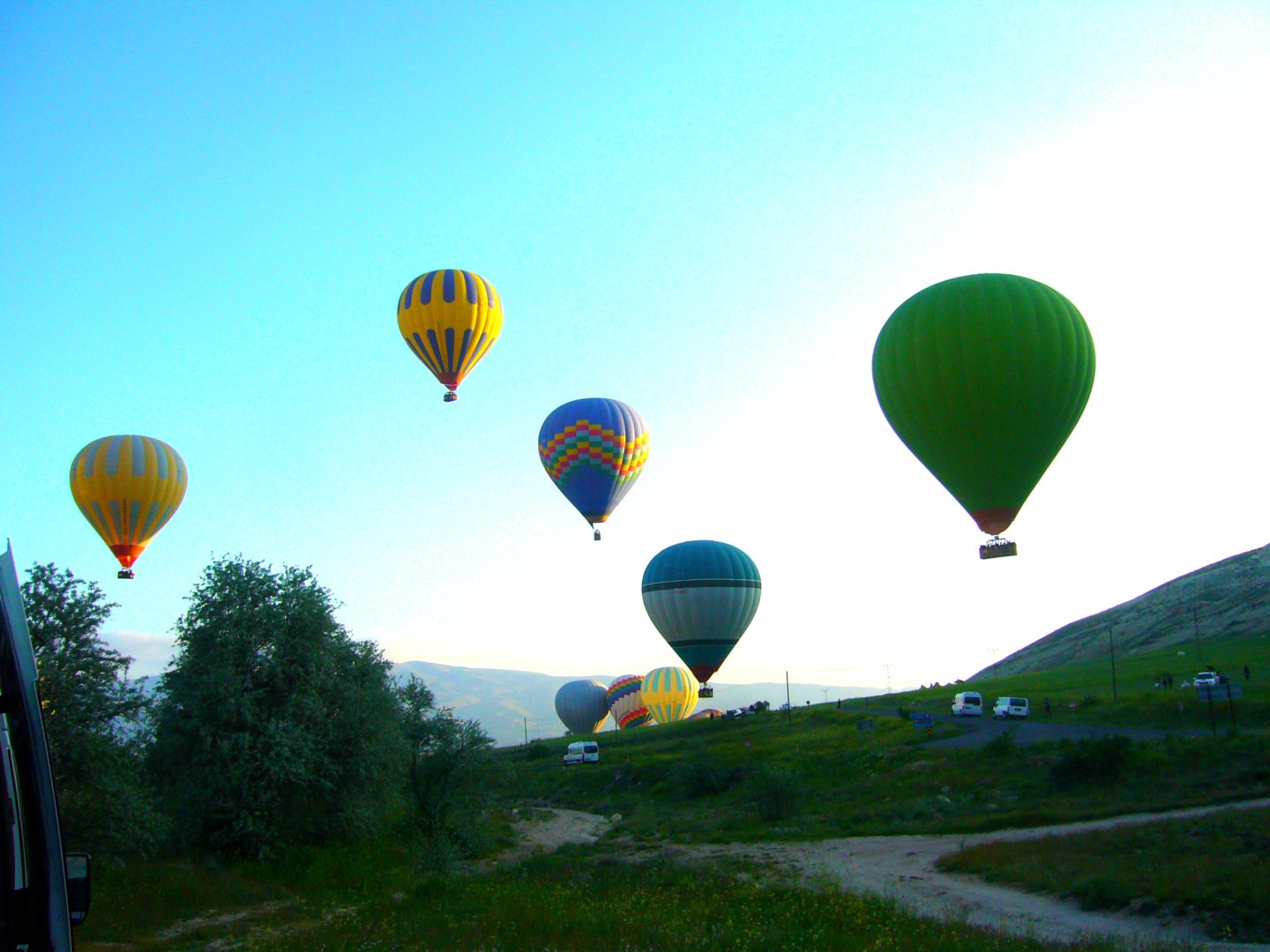 Anyone who loves travelling should put Cappadocia down on their list of places to visit. The landscape in Central Anatolia in Turkey is one of the most beautiful and breath-taking cultural heritage sites in the world. The unique cavernous architecture, subterranean cities, magical fairy chimneys, an adventurous hot-air balloon ride, horse riding in the valley and a delicious wine tasting are not to be missed. 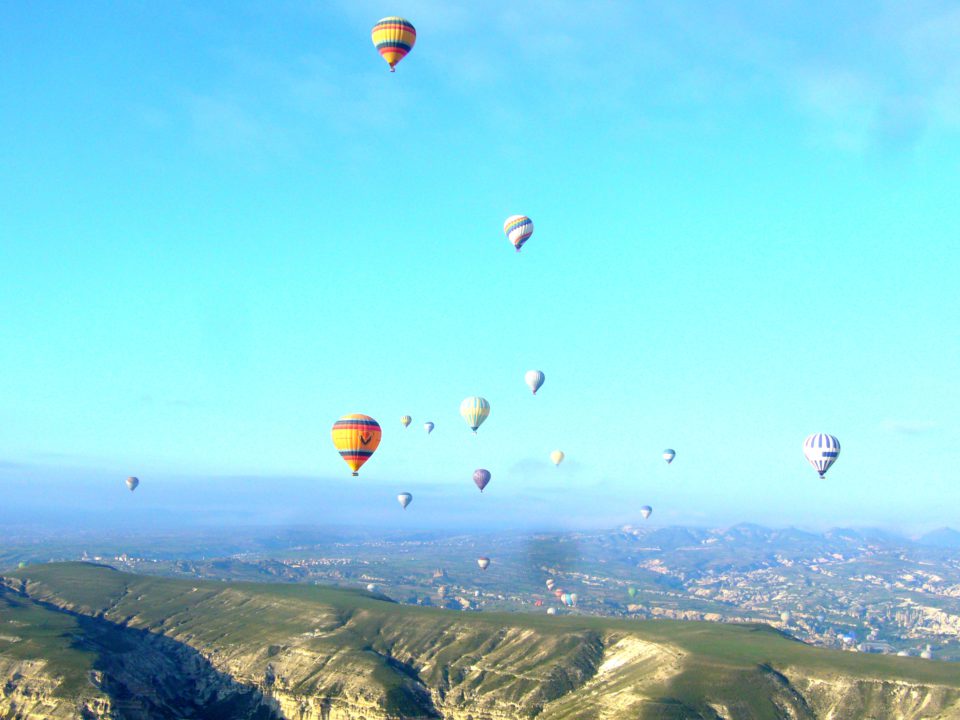 Cappadocia is a region in Central Anatolia and was declared an UNESCO World Cultural Heritage site in 1985. And for good reason: Volcanoes erupted here millions of years ago. The thick layer of ash covered the area, which in the course of time hardened into tuff. Since tuff is very soft at first, wind and water can form a fairytale landscape. The houses in the shape of sugar hats, which were called “fairy chimneys”, were really built by cavemen who lived in them. The unique landscape is almost like a film tour of an elaborate fairy tale country. 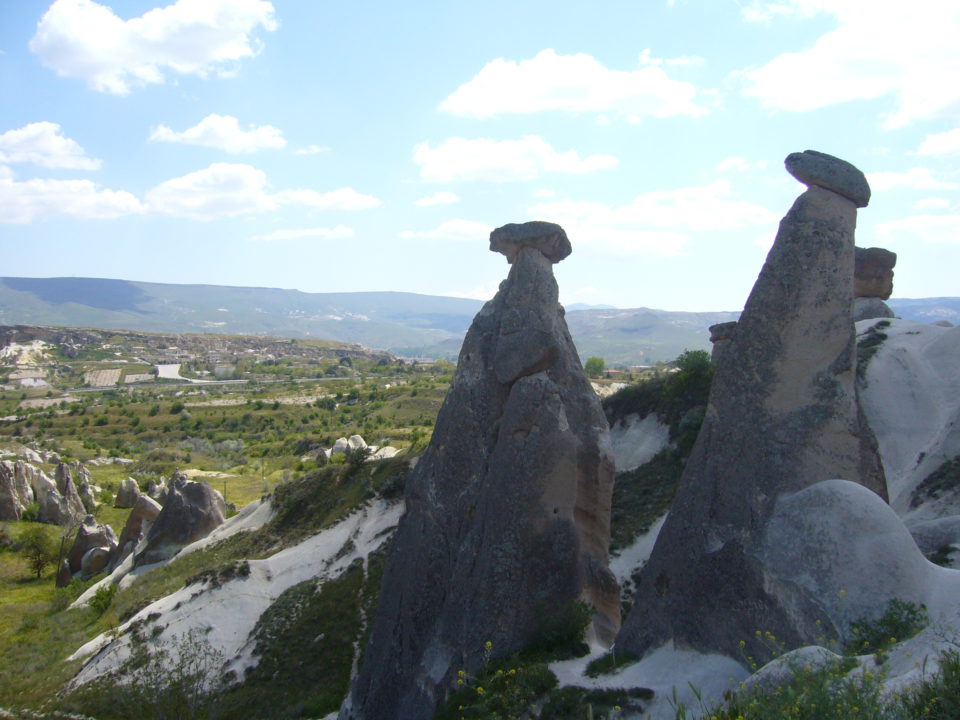 2. Spending the night in a cave

Tourists here are unavoidable; you’ll see them crawling out of all the cave holes. But to accommodate them the caves have been transformed into cave hotels or hostels, so you can find somewhere to stay regardless of your budget. The old residents make a profit from it and often rent out their apartments with AirBnb. Small note: In the cave hotels you have to expect some dust from the ceiling.

3. Hiking in the valley

Do you want to feel a bit like you’re at the Grand Canyon? Then hiking in the Rose Valley, Meskendir Valley or Red Valley is an absolute must. Do not be surprised if while hiking you suddenly find yourself in an artificial oasis. In a niche of the Rose Valley, the Dutch-Turkish artists Charlot and Yılmaz have set themselves up making art and they sell their pieces of work there.

If you find canyons particularly fascinating, you’ll find some in the Ihlara Valley that are up to 150 metres deep. You have to take special care when there is a risk of skidding. 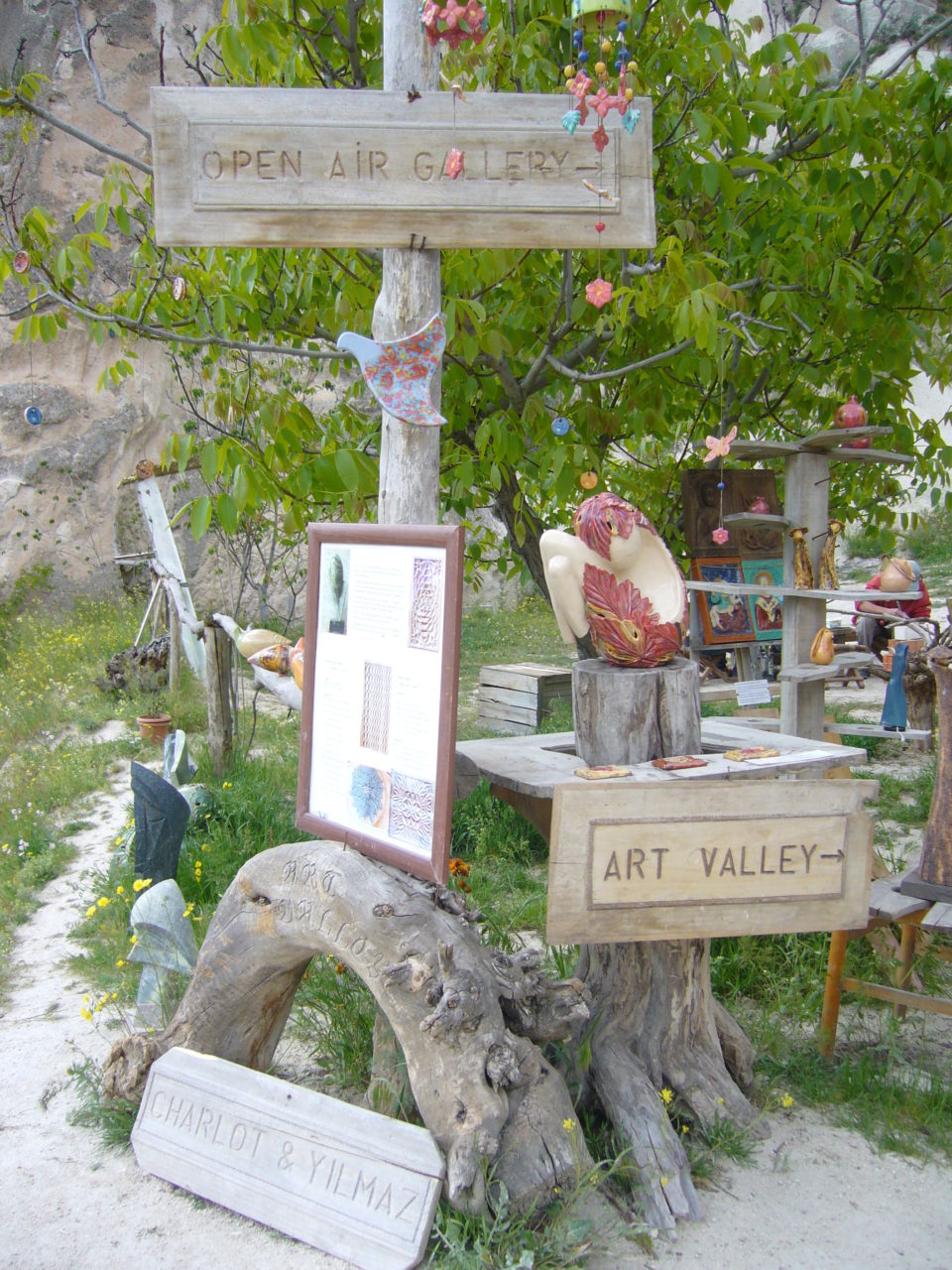 The classic activity in this region. Would you like to hover in a hot-air balloon over Cappadocia? Leave your fear of heights behind you, because this unforgettable airy experience is not to be missed. Even if you have to get up at 4 o’clock in the morning and then have to wait to see what the weather conditions are like, it is all worth it for the spectacular view. If you’re scared of heights, you might want to stay on firm ground and wave at the hot air balloons from afar, because they fly over Cappadocia for two hours. A ride costs around 150 euros. When booking, make sure you do not book through an agency. For example, if you go straight to www.istanbulballoons.com you are on the right page. 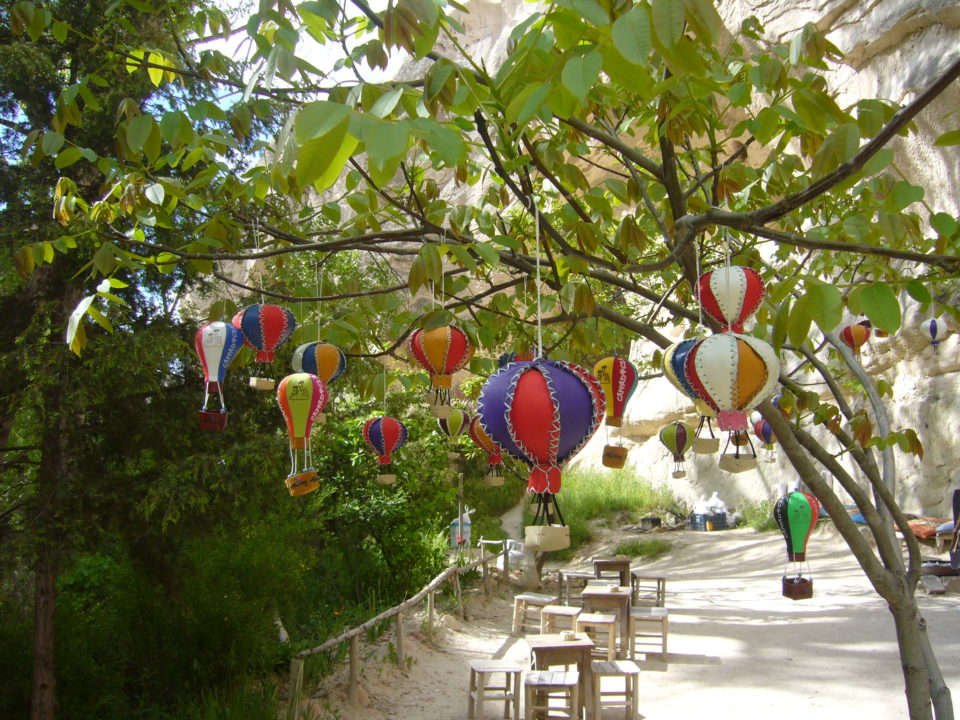 Here they are hanging in the trees 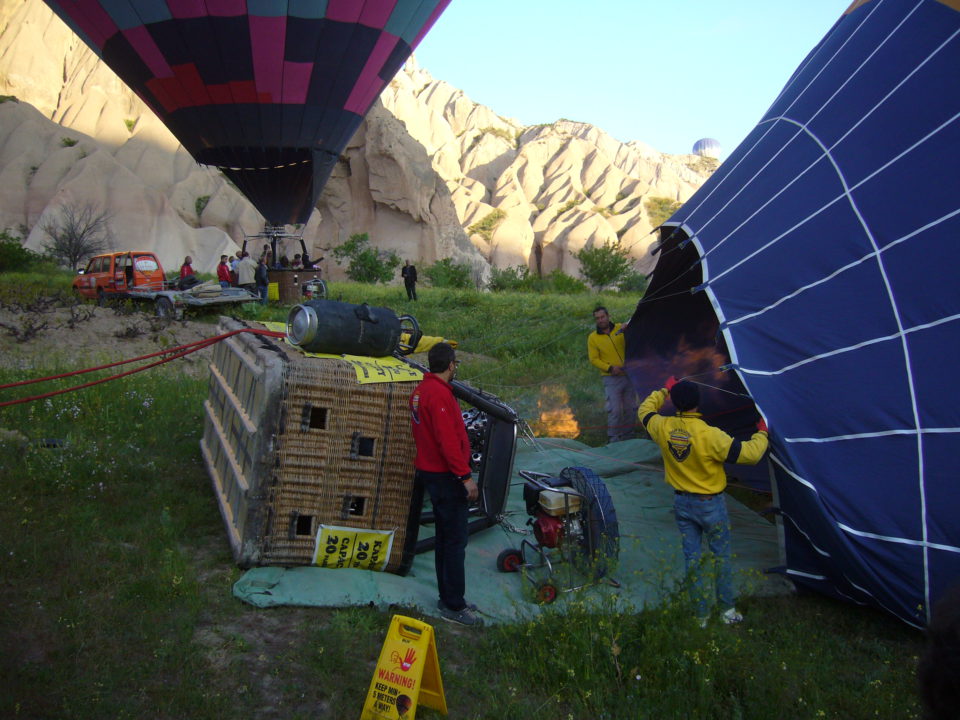 About to go up 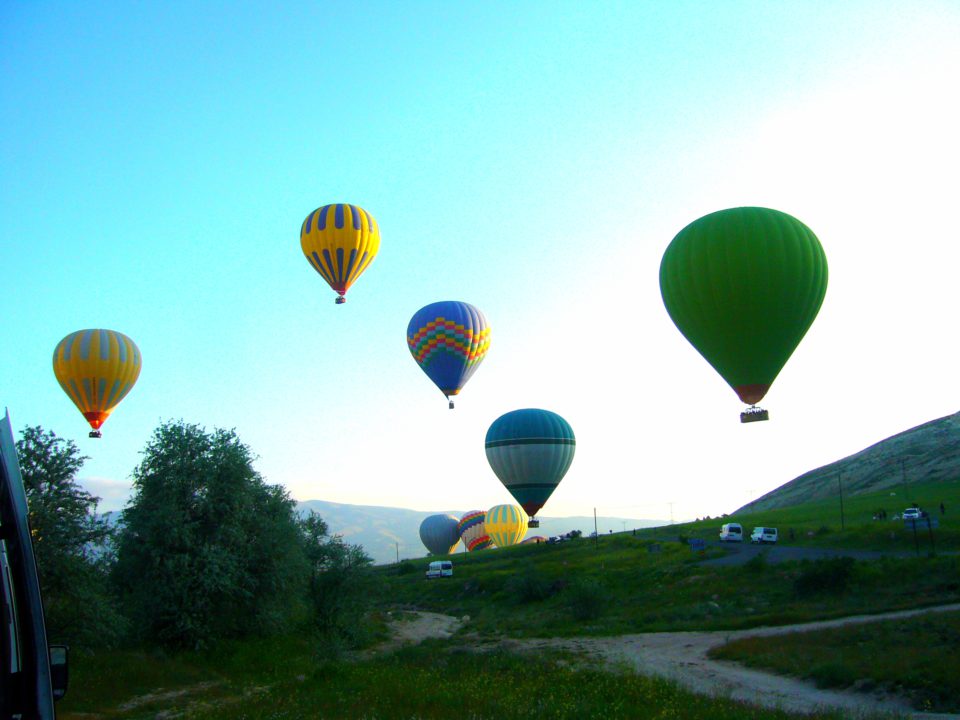 In addition to hiking in the valley, riding is also a must in Cappadocia. Whether you are a beginner or an advanced rider, there is a riding trip for everyone. So you don’t get lost in the labyrinth of the valley, you are accompanied by an expert who can guide you through the fascinating mountain landscape. If you book using www.cemalranch.com then it costs about 75 Turkish lira for an hour-long ride.

The hat-like rocks are known in Cappadocia as “peribacaları” – fairy chimneys. The most beautiful fairy chimneys can be seen in Paşabağı, Uçhisar, Göreme or Zelve. About 20 million years ago, ash, dust and rock accumulated in this region after the volcanoes erupted. Due to wind and water erosion this then formed tuff, thus creating today’s fairy chimneys which reach up to 30 metres high. If you look closely, you can see their similarity to asparagus stalks.

Some 7500 years before Christ, people forged the first caves in the rocks, which in the following decades housed many different groups of people. The first Christians in Byzantium settled here and built their cave churches. Since Christians were initially persecuted under the rule of the Romans, many hid in these subterranean cities. 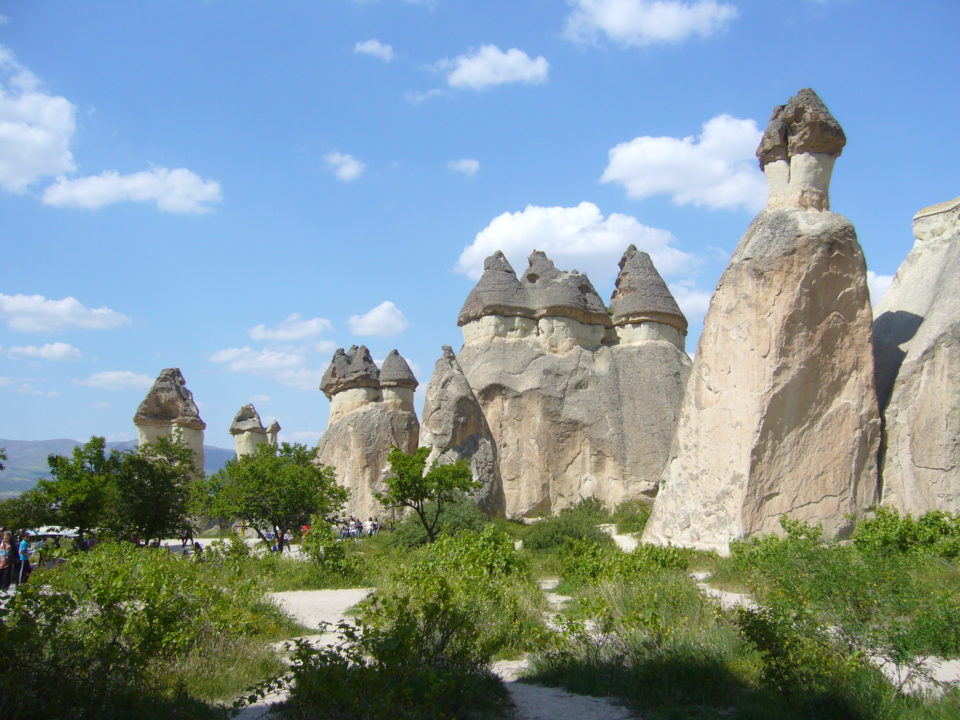 7. The underworld of Cappadocia

Only a few years ago, the first underworlds in Cappadocia were uncovered. The largest caves with their countless layers and hiding places are located in the towns of Kaymaklı and Derinkuyu. These cities are enormous. Their dimensions are not comparable to the underground cities of Europe or elsewhere. Archaeologists’ exploration of them is still near the beginning. It is assumed that there are more than 60 minor cities in this region. The entrance fee for Kaymaklı is 20 Turkish lira. If you suffer from claustrophobia, it’s probably best to skip this one. 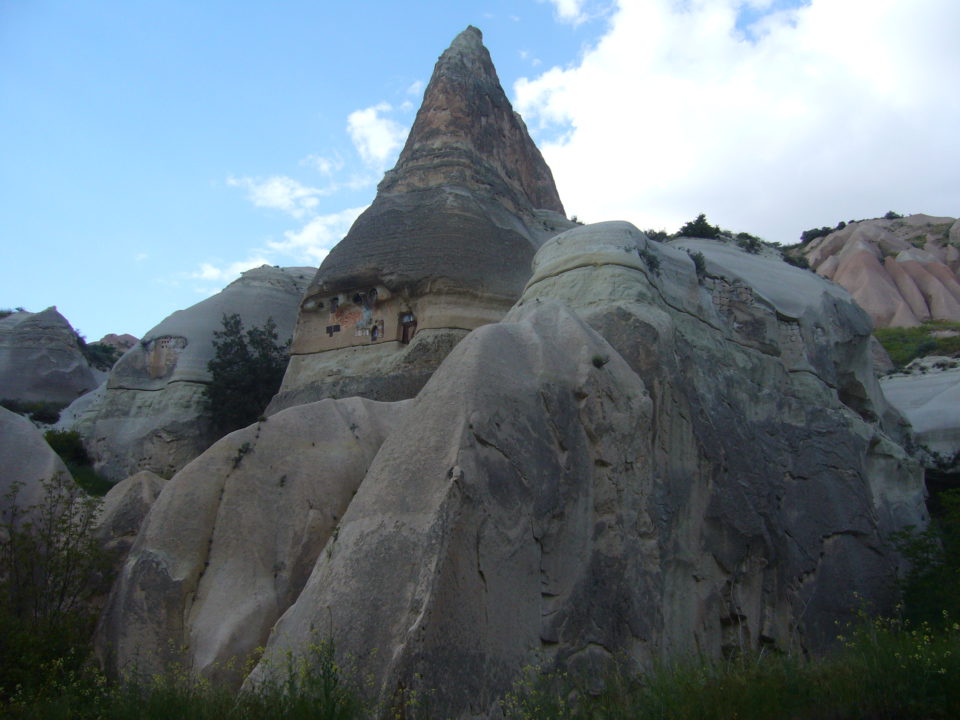 The most famous city in Cappadocia is Göreme. The word comes from the verb “görmek”, in English “to see” and this tells you that this city has to be seen. At the same time, it is also a national park with a breath-taking cavernous architecture and an open air museum. Admission costs 25 Turkish lira. There are various cave churches covered in fresco paintings, and houses embedded in the rocks, which were once occupied.

At the end of your trip you can have pass a relaxing evening in the wine bar. The Rose Valley is well-known for its vineyards. It dates back to the era of the Byzantines, who even christened their churches “wine churches”. During your visit to Cappadocia you will certainly come across some of these churches. Cheers! 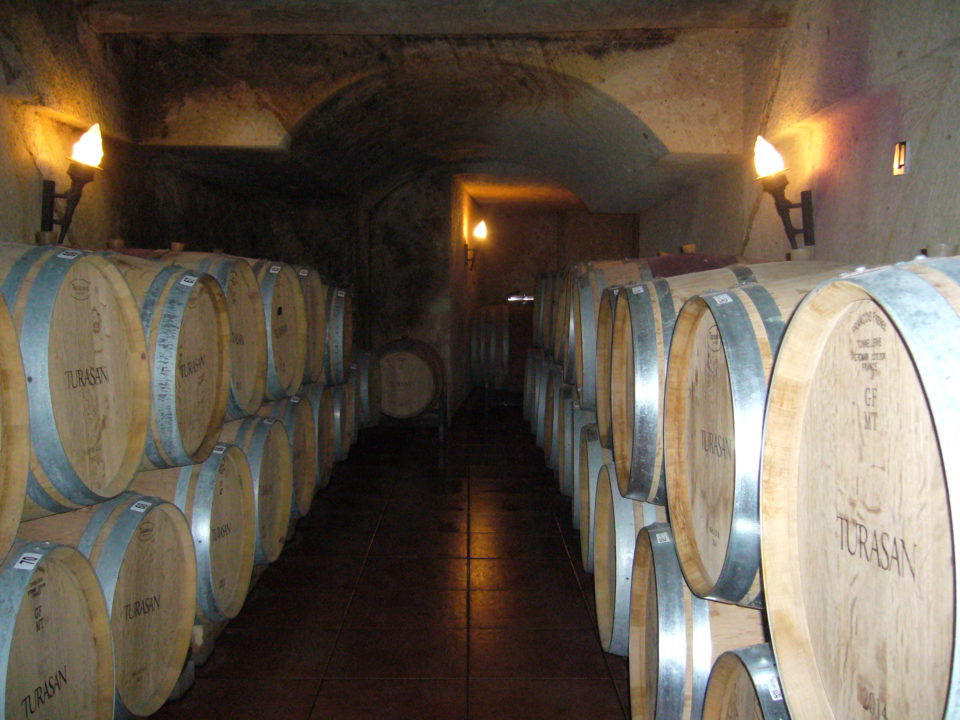 You cannot miss the sunset in Cappadocia. On various hills at the end of the day lots of people will be found drinking and enjoying the evening watching the red sunset. If you reach the end of a walk in Çavuşin or you find yourself in Göreme, you cannot miss this spectacle. 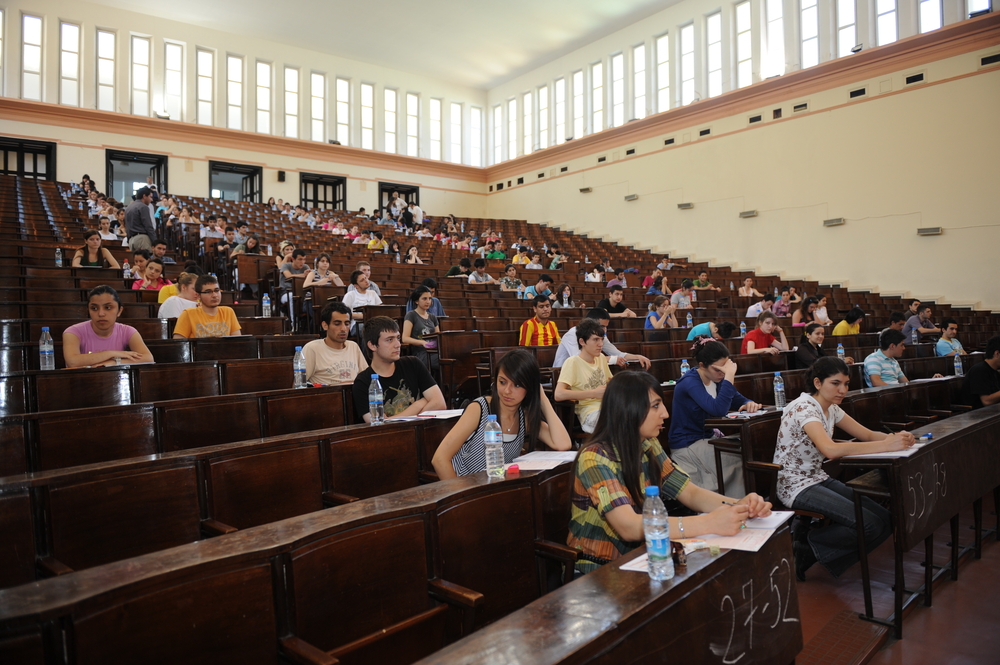 Does Erasmus in Turkey Have a Future?