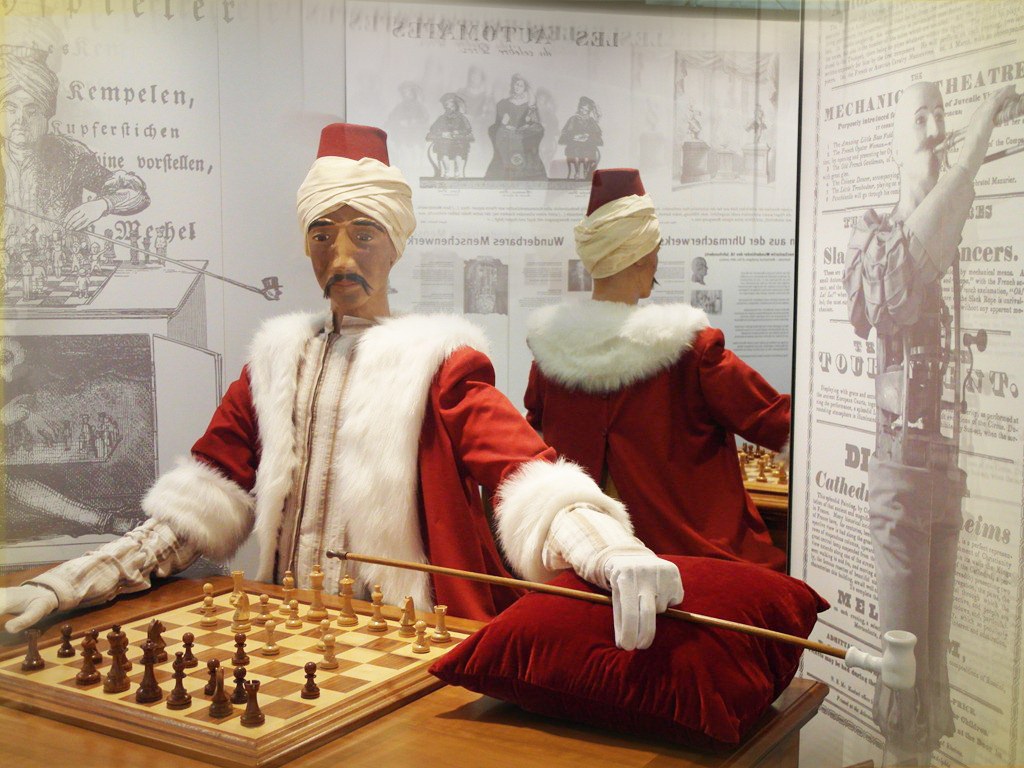 The Turk That Defeated Napoleon

Napoleon must have been amazed when he first came into contact with the doll. Terrifying, with a shiny moustache a mischievous smile, in a red robe and turban. It stood there like a reflection of an Ottoman in front of a wooden box, upon which chess, the game of kings, had been set up. The spirit from the machine stared into nothingness, while his inflexible arm moved to the noise of a rattling clock‘s mysterious mechanism. Since the Ottoman Empire was both revered and feared in Europe at that time, the doll’s garments created a psychological advantage as well.

Suddenly, the hand in the white glove gets down to business, expertly countering Napoleon’s manoeuvres. Finally, the Turk nods three times: The great general has been checkmated in just a few moves. Although Napoleon wanted to provoke it, and made moves that weren’t allowed, the robot didn‘t let itself become confused. Patiently, the robot had placed the pieces back in their original positions. After Napoleon tried to cheat multiple times, the Turk swept the pieces off of the table, as if to say »Enough is enough«. The robot was proud, to boot! »It impressed the great general«, explains Andreas Stolte, the speaker for the Heinz Nixdorf Computer Museums, where an almost exact replica of the chess machine is on display.

Not only him, but also the Prussian King Frederick the Great, who today is eternalised in Berlin’s image atop a horse, as well as numerous scholars and writers like Edgar Allen Poe, were bewildered by the technical masterpiece. Chess experienced its renaissance in the 18th century, especially in England and France, and was very popular in sophisticated society. The Turk defeated almost every opponent with an elegant understanding for the game and a knack for cunning moves. It did not take long for the rumour to spread that a person was sitting inside the wooden box. The inventor of the chess machine, Wolfgang von Kempelen (1734–1804), however, was able to refute the rumour by opening the wooden box‘s inner room to any sceptic. A tangled bunch of gears and technical instruments ticked by themselves and confirmed the mechanical sophistication of what was supposed to be the first chess computer in the world. And so, further generations continued to puzzle over the secret of the world’s first chess robot.

In reality, the barely half a meter wide walnut wooden chest was indeed hiding a person inside. Thanks to a partition between the left and right halves in the bottom part of the box, distinguished, short statured, chess players could move back and forth in order to shield themselves from the view of curious viewers. »Inside, there is a second foldable chessboard«, explains the museum speaker. With the help of elaborate mechanics, a so-called pantograph carried out every move the hidden player made on the small chessboard, on the actual game board, using level mechanics. He saw his opponent’s moves via magnetic pins under the board.  As if by magic, the Ottoman doll then carried out every move. Until the death of the chess robot’s inventor, no one was successful in bringing the secret of »The Turk« to light. In an article in the Journal des sçavans from 1783, it was revealed that in those days, many scientists had already unsuccessfully tried to explain how the machine worked. It was only when it was rediscovered in 1825 that the riddle around the supposed miracle machine came to a sudden end. During a fair, an onlooker in the audience purposely cried out »Fire, fire« and the chess player hidden inside ran out of the wooden box in a panic.

Today, the chess robot has a concrete place in chess literature and history, with diverse replicas in technical museums. Along with this, the saying »to turk something« has taken hold in German, which, roughly translated, means »to feign« or »to forge«. The then World Chess Champion Kasparow won against the first real chess computer by IBM, the Deep Blue, in the first match in 1996. One can only wonder if he would have been so successful against the Turk. Art is Not Innocent